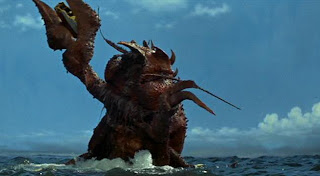 In Godzilla vs. the Sea Monster, a terrorist organization called the Red Bamboo had set up a base of operations on Letchi Island. The giant shrimp Ebirah was successfully used to destroy any ship that came too close to the island. The Red Bamboo ships used a special extract from the island’s fruit to protect themselves from Ebirah. When a small group of people stranded on the island saw the mutant dinosaur Godzilla sleeping in a cave, they woke him so he could fight Ebirah. Godzilla easily won and injured the crustacean with his atomic ray. The day after, a Red Bamboo ship appeared, but they unknowingly used a placebo and not the fruit extract. Ebirah attacked and tore the ship apart. Godzilla reappeared, but this time, Godzilla pulled off Ebirah’s claws. The wounded Ebirah then fled.
Ebirah was not seen again until he appeared on Monster Island in Ichiro’s dreams in All Monsters Attack. His appearance in this film is simply stock footage utilized from Godzilla vs. the Sea Monster. Ebirah was originally going to appear in Destroy All Monsters, but did not make it to the final draft.
Publicada por godzilladoom à(s) sábado, junho 19, 2010