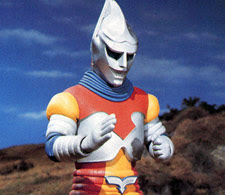 In Godzilla vs. Megalon, Jet Jaguar is a robot created by the protagonist, Goro Ibuki. He is initially depicted as a mindless robot, and is controlled by the evil Seatopians for most of the film. He later gains sentience and helps Godzilla fight both the evil Gigan and Megalon, although for a short moment. He is depicted as a heroic character with the abilities to communicate with kaiju (Japanese word for giant beast), fly, alter his own size, and use floodlights in his eyes.
He was even given a brief theme song at the end of the film, performed by Masato Shimon. A longer version of the song was featured on a record released in conjunction with the film's original release
Publicada por godzilladoom à(s) sábado, junho 19, 2010